Where to Run in Salt Lake City

A mix of roads, paved pathways, parks and trails that are easily accessible any time of year! Too much snow for your liking? Slap on a pair of MICROspikes or grab a pair of snowshoes and check out the changing beauty of the local routes and trails.

*All titles link to more information and maps*

STRAVA Heat Map – A Great Place To Start
Get a quick overall picture of local places to run, hike and walk. Easily check out places you’ve never been before! Sort the map by run, bike or both. The darker the line, the more that the road/trail/route is being used by others are good places to try. The heat map is best used in combination with tips on the suggested areas below.

SLRC Run Map
Salt Lake City is a great area to run in, with lots of off-road courses, parks, and open spaces. Don’t know where to run in Salt Lake City? Use this handy map to find the best trails, canyons, and paths through the heart of the city. 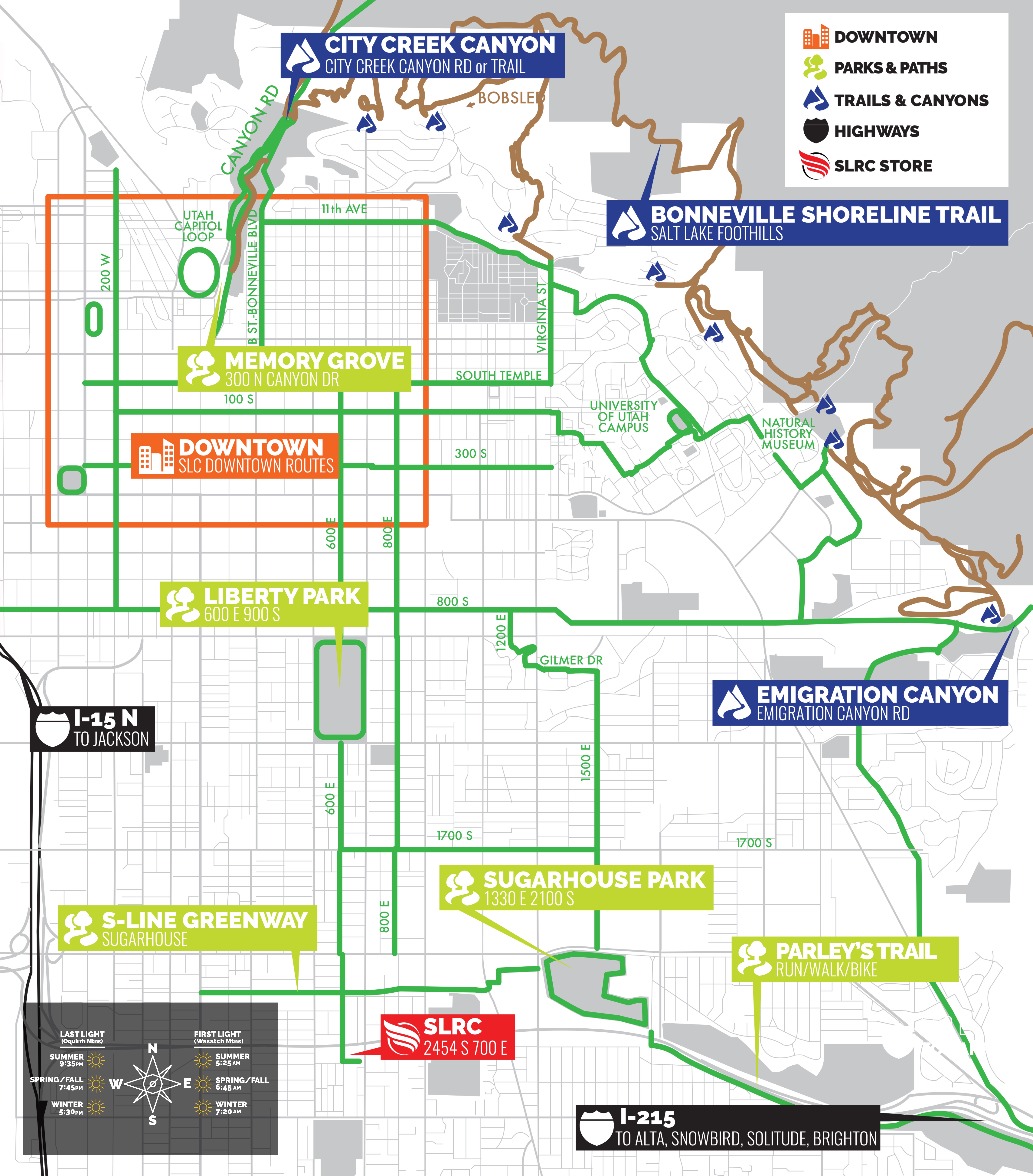 City Creek Canyon – Near Downtown
Located less than one mile from the heart of downtown Salt Lake City, this paved route brings you quickly away from the urban congestion through a very pretty canyon along the pleasant creek. It is fairly easy grade until the last 2 miles, where most of the elevation gain occurs.

Liberty Park – Near Downtown
Located at 600 E 1000 S MAP
The perimeter of the park has a new woodchip running path (1.45 mile loop) that is flat and very soft. The inside loop (1.4 miles) is cement/pavement. It is within warmup/cooldown distance of offices and hotels, and is perfect for tempo and steady state runs.

Jordan River Parkway  – Near Downtown
The Jordan River runs north-south through the center of the valley, just west and mostly parallel to Interstate 15, and is the longest urban paved trail in the United States.  It is a great place for those long training runs or to get away from traffic.  The most popular section is from 3900 South to 12300 South.  Trailheads can be found at most major east/west streets that cross the Jordan River. This trail is also maintained during the winter months on the Murray City Section (4800 S to 6400 S) although the trail is predictable runnable all year round.

Sugar House Park
Located at 1500 E. and 2100 S MAP
The inner paved loop is 1.4 miles of rolling hills. the perimeter grass loop is 1.82 miles. Just east of the park there is an outdoor all weather 400 meter high school track. This park is perfect for speed sessions with intervals on the track, fartleks on grass, or hill/form work or rolling tempo.

Parley’s Trail
Parley’s Trail is a paved bicycle and pedestrian trail which follows the Interstate 80 corridor from the mouth of Parley’s Canyon to the Sugar House Business District.

Draper City Porter Rockwell Trail
This paved trail features spectacular mountain and valley views as it climbs gradually from Draper City Park to the foothills of Point of The Mountain. This trail is named after Orrin Porter Rockwell, a Mormon settler and bodyguard for Joseph Smith and Brigham Young. Rockwell once lived in this part of the Salt Lake Valley where he operated a hotel in the 1800’s.  This trail is great for walking and biking and is suitable for children and adults of all ages and skill levels. This trail is also wheelchair accessible.

Olympic Oval
Runners have the opportunity to train on the 442-meter indoor track that surrounds the Oval speed skating ice dubbed as “The Fastest Ice On Earth”. A Mondo Super X track has been installed with four lanes around the ice plus an eight-lane, 110-meter sprint zone. The track has been marked according to NCAA and IAAF standards.

Daybreak
A 4000 acre master planned residential community located in South Jordan Utah.  Daybreak contains over 30 miles of paved and unpaved trails that wind throughout the community.  Although Daybreak is a private community the trails and parks are open to the public.

Tooele
Located 30 minutes west of Salt Lake City of I-80.  The 4.6-mile Tooele Cross-Town asphalt path runs from the Oquirrh Mountain Trailhead at the southeast end of town all the way to the Mid Valley Trailhead on the northwest side of Tooele OR the 6.7 mile Mid Valley cinder path that starts on Rogers Lane and ends near the Desert Complex.  The hidden gem of Tooele are the several paved Canyon roads with minimal traffic.  Middle Canyon, Settlement Canyon and further south Butterfield Canyon and Ophir Canyon.

Draper City Trails aka Corner Canyon Trails
One of the benefits of Draper’s location in the southeastern corner of the Salt Lake Valley is convenient access to trails. Within a five minute drive, residents can be on high quality trails in the pristine Corner Canyon region or soaking in the 100 mile vistas from the top of Suncrest. Whether you’re in the mood for a light morning stroll or strenuous rocky mountain day hike, Draper has the trail for you. MAP

Park City Trails
The Mountain Trails Foundation is our nonmotorized trail advocate.  Dedicated to promoting & maintaining Park City Utah’s trails for non-motorized recreational use.  Also check out the Park City Trails Series a local trail series, that has 4 distances, from June-September every year.

Jeremy Ranch Road
Located 20 minutes east of Salt Lake City off I-80 at exit 141.  Jeremy Ranch is a 7.3 mile dirt road that can be run out-and-back from either north or south.  The road is rolling with net loss in altitude going north and net gain coming back to the south.  It’s in a semi remote but beautiful area and is a secret spot for the Elite athletes that train in Park City.  The road can be run year round and is maintained very well from the south side up 3 miles to the county line.  In winter it will be snow covered but generally passable.