Welcome back ladies and gentlemen to another exciting edition of “Oh crap, what have I done to myself.” Today we’re going to look at an issue that seems to target an uncanny amount of runners out there. The injury is called Illiotibial Band Friction Syndrome, or IT Band Syndrome or ITB for short. I usually prefer understanding what an actual structure is, how it works, and how it becomes injured before I learn how to heal it, so that’s what I’m going to make you all do! 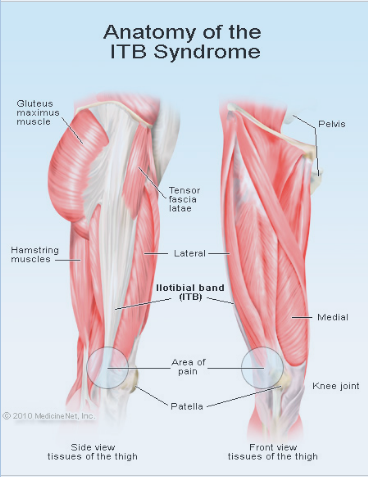 The IT Band is a thick fibrous tissue that originates from a collection of muscles on the outside of your hip and inserts to a bony protuberance just below and outside of your knee called the Gerdy’s Tubercle. There are three muscles associated with the origination point of the IT band, they are the Gluteus Maximus, Gluteus Medius, and Tensor Fascia Latae muscles. If you follow the IT Band down to the tubercle, you will find that it positions itself in front of, or sometimes behind a little knob on your femur bone called a femoral epicondyle. When you bend your knee past 30 degrees the IT Band moves behind the femoral epicondyle. If you were to fully extend your knee, the IT Band moves in front of your femoral epicondyle.

Muscles Tied to the IT Band

Here is a brief overview of what the three muscles at the origination point of the IT Band are responsible for:

Gluteus Maximus(GMAX): Extension of the hip.

Gluteus Medius(GME): Abduction of the hip (a hip stabilizer)

Etiologies of the IT Band

Stable hips are very important to a runner. The GME and TFL are designed to prevent excessive motion of the hips while we are walking and running. If there are deficiencies and weaknesses in these muscles, the hips flop all over the place and we can expect a hip blow-out several years down the road. When we run and our muscles work hard by preventing excessive hip movements, they become tighter and tighter. Because of this, they end up pulling on the IT Band making it taut. When the IT Band becomes tighter, it produces more friction over the femoral epicondyle every time our knee flexes and extends.

Pathology of IT Band Syndrome

The IT Band comes in contact with the femoral epicondyle many times during your run. If the IT Band is tight, this contact turns in to something much more painful. When the Band creates friction with the epicondyle, inflammation usually occurs. If the IT Band is inflamed, the chance that it will create more friction when it is engorged becomes very great. Take for example: When you bite your lip, it swells up, how many more times do you bite that same spot on your lip over the next few days? The same thing happens with the IT Band. Repeated run-ins with the femoral epicondyle can cause the IT Band to increased damage beyond friction and inflammation. It will eventually scar over, and that scar tissue is much less malleable and flexible than the band itself. When scar tissue is created over the friction location, it becomes tighter and more susceptible to further complications with friction. This can wreak further havoc on your knee if you let it go far enough. Eventually the IT Band becomes so tight that it pulls the patella (kneecap) laterally and renders it incapable of tracking properly. This can result in improper wear of the articular cartilage on the underside of your patella and predispose you to run-ending pain. Welcome to Painville… Population: YOU!!!

Signs and Symptoms of IT Band Syndrome

Signs and symptoms of ITB can include, but are not limited to:

Prevention of Illiotibial Band Friction Syndrome can be accomplished in a few easy steps:

Rehabilitation for the friction syndrome is similar to prevention.

Self-diagnosis can be difficult on this one. If you have any questions, comments, or concerns please feel free to contact me at the Salt Lake Running Company in Draper. 801-676-0844. If you are having hip issues and are concerned whether it is ITB or not, some other things can be going on inside your hips, here’s a quick glance at some other injuries that are sometimes confused with and related to ITB:

If you feel like your hip snaps from time to time while running, walking or other activity it could be caused by an inflamed bursa sac in your hip. A bursa sac is a fluid-filled sac that helps lubricate a particular joint. If your hip muscles become too tight they can rub on this bursa sac causing it to become inflamed. An inflamed bursa sac is known as bursitis. This type of hip bursitis occurs on your trochanter, which is where the leg bone attaches to the hip. Therefore, this injury is known as Trochanteric Bursitis.

Please post any comments if you have had luck with alternate rehabilitation, modalities, or prevention for Illiotibial Band Friction Syndrome.